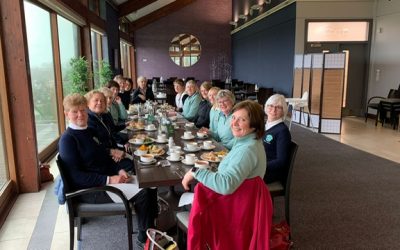 It’s getting near the end of the season for the Friendly Winter League.

This fun league is for ladies whose handicaps are between 21-36; three pairs play 4-
BBB over nine holes and it’s played though the season (mmm, yes the clue is in the
name).

We join three other local clubs, Malone, Belvoir and Shandon in the competition
which has each club playing one home and one away fixture against every other
club. It’s popular when ladies sign up during a mild September day, maybe not so
popular when it comes to a rainy, grey February morning, but team captains Wendy
and Patricia K have done great work fielding a team and 16 ladies have played thus
far.

Rockmount’s latest outing was against Belvoir Park on Monday 7 February, and
nothing daunted and despite the weather the ladies had a great game and our team came out winning the three matches.
Of the 15 matches played to date, the ladies have won 10, drawn 3 and lost two.

Nonetheless, the league is currently very tight and it is all to play for. The final fixture
is a home match at the end of February against Shandon Park.

Good luck ladies we are behind you and hope the weather’s fine!

Lady Captain, Elana says: “We have been playing in this league for over ten years
and have had enjoyed our share of success. But regardless which club picks up the
trophy this year, every one of our players will have enjoyed fun golf on great courses,
made some new friends and have some stories to tell – even if they’re just about the weather!”