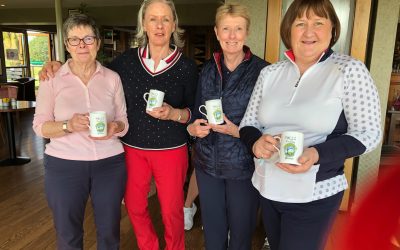 The Friendly Winter League prize-giving and end-of-season ‘Fun Day’ took place at Rockmount at the end of March.

After what had been a difficult season, with matches abandoned due to weather and course conditions, the winning team Belvoir collected the shield, two points ahead of Rockmount.

However, it was glorious weather for the fun day competition. All four clubs – Rockmount, Belvoir, Malone and Shandon – managed to field full teams despite Covid. Each team consisted of one player from each club and eight teams of 4 players competed. The team led by Bernie Traill emerged winners by a single point from the team led by Christine Mo.

Team prizes for the day were specially designed commemorative mugs and coasters and there were also prizes for the longest drive, nearest the pin and for the three 2’s.

The verdict on the day was unanimous – everyone thoroughly enjoyed the course, the competition and the craic, as well as a little shopping for spring golf wear.